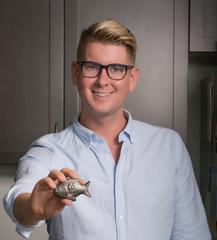 Dr. Gavin Armstrong is committed impact entrepreneur. He is currently serving as the Founder and President of Lucky Iron Fish Enterprise®, a social enterprise attempting to alleviate iron deficiency around the world using a simple health innovation. Through this role he was a Fulbright scholar at Auburn University and was awarded the prestigious Forbes 30 Under 30 in the Social Entrepreneur category in 2016. In 2017 he received the Muhammad Ali Humanitarian Award and was named ‘Social Entrepreneur of the Year’ by EY Canada.

A long-term advocate and activist against hunger and malnutrition, Gavin is the first Canadian to receive the William J. Clinton Award for international work against hunger and is the inaugural recipient of the international Michaelle Jean Emergency Hunger Relief Award. He has also helped the Lucky Iron Fish win multiple Cannes Lion awards including the Grand Prix and several Clio Design Awards including the Grand Prix in healthcare. He has also received a Silver Innovation Award from the Edison Foundation. In 2015 Conscious Company Magazine featured Gavin as one of the seventeen ‘Rising Social Entrepreneurs’ of the year. He is also the youngest recipient of the Social Innovator of the Year Award from the Lewis Institute at Babson College. In 2017 Gavin was named one of the 50 philanthropists changing the world by Town & Country, and in 2018 was named in the top 100 visionary leaders by Real-Leaders magazine.