The Kirchner Food Fellowship is pleased to have Gavin Armstrong as our first Entrepreneurial Fellow. Gavin and his company Lucky Iron Fish represent a perfect example of the kind of companies we are hoping our fellows will be able to locate and invest in. 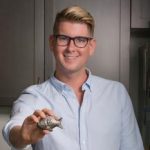 Gavin R. Armstrong
Dr. Gavin Armstrong is committed impact entrepreneur. He is currently serving as the Founder and President of Lucky Iron Fish Enterprise®, a social enterprise attempting to alleviate iron deficiency around the world using a simple health innovation. Through this role he was a Fulbright scholar at Auburn University and was awarded the prestigious Forbes 30 Under 30 in the Social Entrepreneur category in 2016. In 2017 he received the Muhammad Ali Humanitarian Award and was named ‘Social Entrepreneur of the Year’ by EY Canada.

A long-term advocate and activist against hunger and malnutrition, Gavin is the first Canadian to receive the William J. Clinton Award for international work against hunger and is the inaugural recipient of the international Michaelle Jean Emergency Hunger Relief Award. He has also helped the Lucky Iron Fish win multiple Cannes Lion awards including the Grand Prix and several Clio Design Awards including the Grand Prix in healthcare. He has also received a Silver Innovation Award from the Edison Foundation. In 2015 Conscious Company Magazine featured Gavin as one of the seventeen ‘Rising Social Entrepreneurs’ of the year. He is also the youngest recipient of the Social Innovator of the Year Award from the Lewis Institute at Babson College. In 2017 Gavin was named one of the 50 philanthropists changing the world by Town & Country, and in 2018 was named in the top 100 visionary leaders by Real-Leaders magazine.

The Lucky Iron Fish™ is a social entrepreneurship organization implementing a simple health innovation to alleviate iron deficiency and iron deficiency anemia in Cambodia, especially in women and children. Its vision is to become a global leader in promoting use of this health innovation to improve the lives of two billion people who suffer from iron deficiency. Iron deficiency reduces capacity to work, impairs cognitive development in children, and results in anemia and weakness. Using the Lucky Iron Fish™ every day preparing food or sterilizing water, halves the incidence of clinical anemia and increases circulating and stored iron. The fish can be made from scrap metal by local metal workers, so could stimulate small businesses across Cambodia to produce and distribute the fish. In addition, there is an opportunity to develop businesses that will ensure quality control of the product.

Fireside Chat with the Kirchner Fellows: Reflections from the Inaugural HBCU Cohort